For a normal customer it is difficult to recognize why a sun tunnel should be 20% cheaper than a real sun tunnel which causes no embarrassment or worry neither to its producer nor to the person who chooses it for their home.

Why are Lightway crystal sun tunnels more expensive than the competition?

Roof dome are made from Bohemian Crystal and practically don’t age compared to plastic domes. Crystal has great capacity for collecting daylight when there is cloud cover. Crystal domes don’t distort the natural colors of daylight. The surface of crystal is very hard and smooth and smog and dust doesn’t stick to it as on plastic. Crystal domes don’t yellow after several years on a roof and continue to emit light for decades. The surface of the dome is perfectly washed with each rain because smog and dust are not baked on as with ordinary plastic domes. 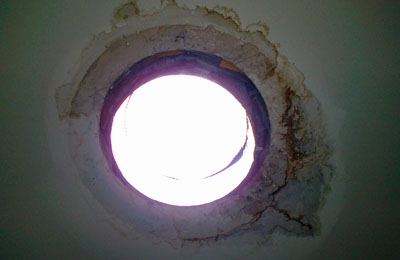 When water leaks from a sun tunnel on cold days and leads to heat loss in winter, and in summer, conversely, there is a lot of heat in the space.

This feature is not comparable with anything on the sun tunnel market. It has been patented by Lightway as a feature directly connected to the heat insulation of the building at the access point of the tube and prevents the development of water condensation in the sun tunnel, loss of heat in winter months and excess heat gain in summer months. Other producers use a so-called double diffuser, which is ineffective as it is not connected at the point of heat insulation and doesn’t interrupt the thermal bridge of the aluminum tube. Some use a double dome with the assumption that it solves the problem. The dome is not connected to the heat insulation and the thermal bridge again develops. This is only an advertising move for people who are unable to recognize because they aren’t specialists. Some producers put a transparent plastic partition inside the tube and claim that it breaks airflow and thus prevents water condensation. According to the laws of physics, it is not possible to interrupt air current at joints larger than 18mm. This producer puts this plastic partition 30cm above the diffuser. In reality it is actually only a lid against the flow of water onto the diffuser so that it is hidden from customers’ eyes and he is not shocked that the tube is full of water, which is actually happening with his sun tunnel. 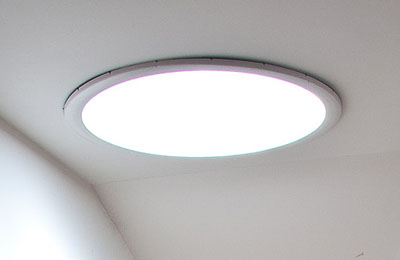 Diffusers – Spreaders of light throughout the room

Lightway chose sodium-potassium glass for the ceiling diffusers of incoming light. Other producers make this feature from plastic, which means faster aging and the danger of color distortion in the incoming daylight. There is a difference visible to the eye between plastic and glass diffusers.

Comparison of varieties of sun tunnels in use

Generally, there are 3 kinds of reflective surfaces for the tubes. In them we distinguish various reflective layers which attempt to direct the flow of daylight. It is the most important component of a sun tunnel and, depending on the type of tube, we can know what to expect as a result, and if the sun tunnel delivers enough daylight and quality daylight and also how long it will deliver it.

The following basic characteristics of sun tunnel tubes are evaluated:

How to recognize it? The material reminds you of an accordion, it is composed of laminates which are fixed with aluminum foil and the tube is not rigid.

Tube with an Adhesive Reflective Foil on an Aluminum Surface 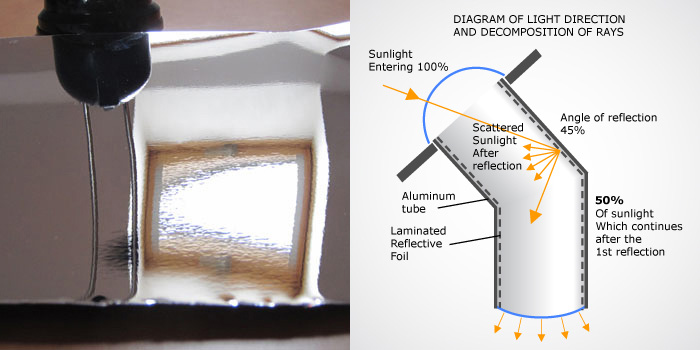 How to recognize it? Ask a supplier if the tube has a reflective layer created from a sticker, lamination or otherwise affixed reflective foil. As well, look at the surface in the light personally. If you can make out a subtle orange-like structure of the reflective surface, it is this type described here. Producers present a high reflectivity of 99.7%. So what’s the catch?

Tube with Mirrored Reflective Surface Produced by the Technology: Chemical Vapor Deposition in a Vacuum.

How to recognize it? The reflective surface of the tube, under all angles and against the light, is clear and clean like a mirror.